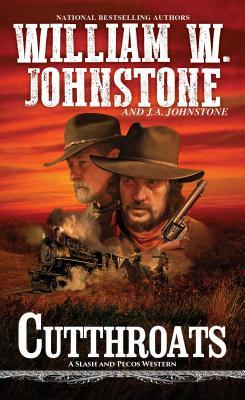 Title: Cutthroats
Series: Slash and Pecos Western
Author: William W.Johnstone
Genre: western
Pages:414
Not every Western hero wears a white hat or a tin star. Most of them are just fighting to survive. Some of them can be liars, cheaters, and thieves. And then there's a couple of old-time robbers named Slash and Pecos . . .
Two wanted outlaws. One hell of a story.
After a lifetime of robbing banks and holding up trains, Jimmy "Slash" Braddock and Melvin "Pecos Kid" Baker are ready to call it quits--though not completely by choice. Sold out by their old gang, Slash and Pecos have to bust out of jail and pull one last job to finance their early retirement . . .
The target is a rancher's payroll train. Catch is: the train is carrying a Gatling gun and twenty deputy US marshals who know they're coming. Caught and quickly sentenced to hang, their old enemy--the wheelchair-bound, bucket of mean, Marshal L.C. Bledsoe--shows up at the last minute to spare their lives. For a price. He'll let them live if they hunt down their old gang, the Snake River Marauders. And kill those prairie rats--with extreme prejudice . . .


My thoughts
Rating: 4.5
Would I recommend it? yes
Will I read more of this series? yes
Would I read more by this author ? yes of course I would
Once again the authors have doing a job of bring one of their stories to live, especially the characters Slash and Pecos, the story like many others of their's pulled me in to the story and had me hooked , there's just something about their stories that I will always love wither its a western or horror , While its some right like many of their other ones , its still a good one to read , and I hope this does become a series because there isn't a hole lot of westerns out there that the bad guys become the good guys in some way or there. With that said I want to say thanks to Netgalley for letting me read and review it exchange for my honest opinion .
- May 16, 2019