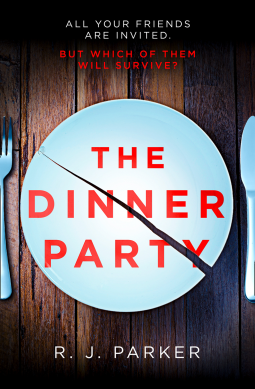 Title: The Dinner Party
Author:R.J. Parker
Genre:thriller
Rating:5
All your friends are invited. But which of them will survive?
An addictive and twisty psychological thriller about the dark secrets that lie within a peaceful neighbourhood.
Eight friends. Eight secrets. One killer.
A group of old friends gather in a peaceful suburban street for a dinner party.
They are expecting a fun evening of wine, food and pleasant company. But then they start to play the game…
It’s about trust and dark secrets – it tests marriage to its limits – and none of them can begin to imagine its consequences.
Because the next day, two guests are dead and the others are trapped in a nightmare

My thoughts
Would I recommend it?yes
Would I read more by this author?yes
Not a type of dinner party i want to tend where a game is played and secrets are wrote down and then those very secrets lead to murder . Which brings the question up do we really know our  friends and love ones as well as we think we do and how far would you or someone go to keeps those secrets from being found out even though no one except the person the secret is about knows what that secret is. Lies, secrets and murder what else you want in a story that will keep you wanting more .With that said i want to thank NetGalley for letting me read and revirew it.
- April 03, 2020