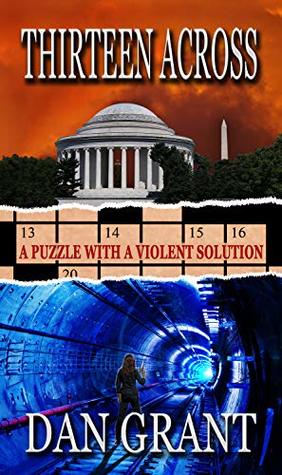 
THIRTEEN ACROSS. Seven stops. Seven sets of clues. A race against time. Covert medical research. Will FBI Special Agent Kate Morgan survive it? It starts with an unfolding puzzle and Thirteen Across.
Kate Morgan is on an Orange line train when it is bombed. Phillip Barnes has made his attacks on the nation’s capital personal. Thirteen Across is an ominous sign of the events to come. Kate finds herself thrust into the center of a grander conspiracy.
Barnes reveals an unfolding puzzle—its challenge charts a course, one that expires at midnight. Puzzle solutions and destinations expose a dark past built on illegal human research and a quest for the Perfect People Initiative. Kate must log the tours. She’s charged with saving those that she can. If she survives, the final destination is a place for Kate to atone for her past sins. She’s murdered a killer’s family, and there are consequences for that.
The FBI brings in real-life puzzlemaster, Will Shortz, to riddle out stops, while Kate works the frontlines to save seven victims. Each stop is meant to cause pain and torment, yet reveal secrets.
The clock starts at the Foggy Bottom Metro station and ends seven stops later. What Kate thinks she knows about her past is tested as is her ability to survive her trials.


My thoughts
Crossword puzzles, secret government projects, super soldiers, and other dark secrets like medical research, what do they all have in common and what do they do with FBI Special Agent, the bomber, as well as a puzzle master while to answer that question or questions you need to read the book for yourself. I do have to say that while there was twist and turns, and the plot was different then any I've read there was times I was kind of lost and had to go back and re read a page or two, to the point that I just re started the hole book just to understand the story better, as well as the figuring out what character was which and when I did that the story just fell in to place. Of course I had no idea that it was part of a series and if I had know it, it would have made this one a lot easer to understand what was gong on in some parts.With that said I want to thank NetGalley for letting me read and review it .
- December 27, 2019