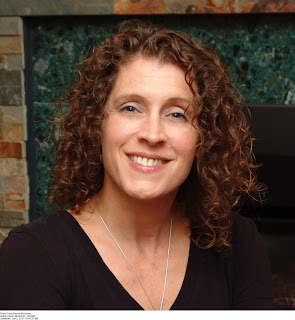 Author Bio:
Hannah Mary McKinnon was born in the UK, grew up in Switzerland and moved to Canada in
2010. After a successful career in recruitment, she quit the corporate world in favor of writing,
and is now the author of The Neighbors and Her Secret Son. She lives in Oakville, Ontario, with
her husband and three sons, and is delighted by her twenty-second commute.
Social Links:
Author Website
Twitter: @HannahMMcKinnon
Instagram: @hannahmarymckinnon
Facebook: @HannahMaryMcKinnon


Goodreads
SISTER DEAR
Author: Hannah Mary McKinnon
ISBN: 9780778309550
Publication Date: May 26, 2020
Publisher: MIRA Books
Buy Links:
Harlequin
Barnes & Noble
Amazon
Books-A-Million
Powell’s
Book Summary:
In Hannah Mary McKinnon’s psychological thriller, SISTER DEAR (MIRA Trade; May 26, 2020;
$17.99), the obsession of Single White Female meets the insidiousness of You, in a twisted fable
about the ease of letting in those who wish us harm, and that mistake’s dire consequences.
The day he dies, Eleanor Hardwicke discovers her father – the only person who has ever loved her
– is not her father. Instead, her biological father is a wealthy Portland businessman who wants
nothing to do with her and to continue his life as if she doesn’t exist. That isn’t going to work for
Eleanor.
Eleanor decides to settle the score. So, she befriends his daughter Victoria, her perfect, beautiful,
carefree half-sister who has gotten all of life’s advantages while Eleanor has gotten none.
As she grows closer to Victoria, Eleanor’s obsession begins to deepen. Maybe she can have the
life she wants, Victoria’s life, if only she can get close enough. 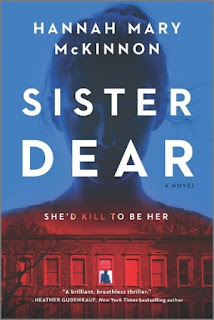 The police didn’t believe me.
A jury wouldn’t have, either, if I’d gone on trial, and most definitely not the judge. My attorney had more than a few reservations about my story. Ms. Allerton hadn’t said as much. She didn’t need to. I saw it in her eyes, could tell by the way she shuffled and reshuffled her papers, as if doing so might shake my lies clean off the pages, leaving only the truth behind in her inky, royal blue swirls.
After our first meeting I’d concluded she must’ve known early on—before she shook my hand with her icy fingers—that I was a liar. Before she’d walked into the room in shiny, four-inch heels, she’d no doubt decided she’d heard my excuses, or a variation thereof, from countless clients already. I was yet another person claiming to be innocent. Another criminal who’d remained adamant they’d done nothing wrong, it wasn’t their fault, honest, despite the overwhelming amount of evidence to the contrary, a wall of impending doom surrounding me.
And still, at the time I’d believed the only reason Ms. Allerton had taken on my case pro-bono was because of the amount of publicity it gave her firm. Reducing my sentence—for there would be one—would amplify her legacy as a hot-shot lawyer. I’d accepted her help. There was no other option. I needed her knowledge, her expertise, saw her as my final hope. I now know her motivations were something else I’d miscalculated. All hope extinguished. Game over.
If I’m being fair, the judgements Ms. Allerton and other people had made about me weren’t completely wrong. I had told lies, some, anyway. While that stripped away part of my claim to innocence, it didn’t mean I was entirely guilty. Not of the things everybody said I’d done. Things I’d had no choice but to confess to, despite that being my biggest lie of all.
But I’ll tell you the truth. The whole truth and nothing but. I’ll start at the beginning, and share everything that happened. Every last detail leading up to one fateful night. The night someone died because of me. The night I lost you, too.
I won’t expect your forgiveness. Our relationship—or lack thereof—will have gone way beyond that point. No. All I can hope for, is that my side of the story will one day help you understand why I did the things I did.
And why I have to do the things I’ve not yet done.


My thoughts
Would I recommend it? Yes
Would I read more by this author? Yes
Rating: 4


First of I want to thank Harlequin MIRA for inviting me to read and reviewing this book , because up till now I had never heard of this author and I'm so glad that I picked it up, because I was hooked right from the start and one of the reasons is because of how it starts out.Another was how well the author wrote her characters and how they actually seemed like they could be seen on a true crime show called Evil Kin, what can I say because after reading this I wouldn't want to be in a room with either one of them. This story is fast pace with twist and turns, dark secrets,murder,its also the type of story that you can't trust anyone in  it because you might just end up with a knife in your back. With that said I also want to thank Netgalley for letting me read and review it as well.
- May 28, 2020