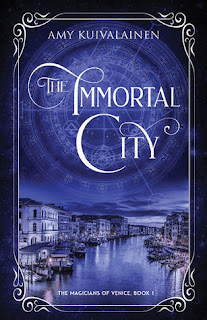 In the heart of Venice, a woman is sacrificed to a forgotten god, sparking a mystery lost for thousands of years.Dr. Penelope Bryne is ridiculed by the academic community for her quest to find the remnants of Atlantis, but when an ancient and mysterious script is found at a murder site, she flies to Venice determined to help the police before the killer strikes again.Penelope has spent her entire life trying to ignore the unexplainable and magical history of Atlantis, but when she meets the enigmatic Alexis Donato, everything she believes will be challenged. Little does she know, Alexis has spent the last three years doing his best to sabotage Penelope’s career so doesn’t learn the truth—Atlantis had seven magicians who survived, and who he has a duty to protect.As Alexis draws her into the darkly, seductive world of magic and history, Penelope will have to use her heart as well as her head if she is to find the answers she seeks.With the new MOSE system due to come online, and Carnivale exploding around them, Penelope and Alexis will have to work together to stop the killer and prevent dark magic from pulling Venice into the sea
My thoughts
Would  recommended it: Yes, in fact of my friends have already picked up a copy to read .
Would I read more of this series? Yes, and I already have book 2 which is called The Sea Of The Dead, thanks to the publishers and NetGalley , because as soon as I saw NetGalley had it I had to request it right then and there.
Would I read more by this author? Yes
First off I have to say that when I first saw this on NetGalley it was the cover that made me request it and I'm so gad I did because once I started reading I didn't want to stop. Another thing I liked was how at times it reminded me of the movie Stargate where you have a Doctor  who does makes a discovery and then goes on to do a presenting about it ( just like Daniel Jackson) and just like him ( she finds little to no acceptance for her theory) and just like Daniel , she's invited to uses her knowledge to help the police solve a murder that might some how be connected to Atlantis.As for the book itself, it was everything I hoped it would be, the characters, the magic, the way the author brings Atlantis to life, and the characters ( ok so I said that twice ) but they was amazing,and had me laughing at times of the way they acted, and you could feel the attraction between Penelope and Alexis, and it wasn't fast burning at all, they took their time so it was like a slow burning that grew with each turn of the page. And each page brought them closer together. And bought the story more to life. With that said I want to thank NetGalley for letting me read and review and I can't wait to read the next book in June
- May 23, 2020