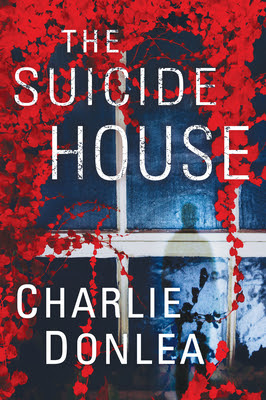 by Charlie Donlea
A chilling murder in a prestigious prep school is at the heart of this riveting new novel from acclaimed author Charlie Donlea, featuring forensic reconstructionist Rory Moore and her psychologist partner, Lane Phillips.

Inside the walls of Indiana's elite Westmont Preparatory High School, expectations run high and rules are strictly enforced. But in the woods beyond the manicured campus and playing fields sits an abandoned boarding house that is infamous among Westmont's students as a late-night hangout. Here, only one rule applies: don't let your candle go out--unless you want the Man in the Mirror to find you. . . .

One year ago, two students were killed there in a grisly slaughter. The case has since become the focus of a hit podcast, The Suicide House. Though a teacher was convicted of the murders, mysteries and questions remain. The most urgent among them is why so many students who survived that horrific night have returned to the boarding house--to kill themselves.

Rory, an expert in reconstructing cold cases, is working on The Suicide House podcast with Lane, recreating the night of the killings in order to find answers that have eluded the school, the town, and the police. But the more they learn about the troubled students, the chillingly stoic culprit, and a dangerous game gone tragically wrong, the more convinced they become that something sinister is still happening. Inside Westmont Prep, the game hasn't ended. It thrives on secrecy and silence. And for its players, there may be no way to win--or to survive.
My thoughts
trigger warning: suicide as well as depression
Would i recommend it? Yes
Would i read more of this series? Yes
Would i read more by this author? Yes
For a second book in a series this is way better than the first one, in this one we get to seem more
of Rory working on the dolls and it goes into more detail of what kindle of brushes and the stuff
she uses.Plus we see more of Lane as well and see more of what his job deals with .Another thing i liked about this one is how the author bright them more to life as well as the other characters. While there are more twist and turns and what seems a lot more going on in the background some how the author pulled it all together so that that the story line worked.I do have to say the story is told in different timelines and at times can be somewhat confusing but once again the author makes it work. It also makes you question yourself about the deaths of the students. Because the entire time i was reading it i kept asking myself was it suicide or was they killed because of something they did or might have seen.So if you read the first one then you need to check this one out just because of how bit more dark and twisted it is. With that said i want to thank NetGalley for letting me read and review it
- June 05, 2020